Training the Next Generation of Mental Health Professionals

These are challenging times.  Woman and men, girls and boys, suffering because of sexual assault and domestic violence.  Teens and young adults burdened by anxiety and depression. And people who are beaten down, day after day, by racism, discrimination or poverty.  And now, in the age of coronavirus, disparities are amplified.  Grief and trauma are multiplied.

Fortunately, there are places like Blanton-Peale.  Blanton-Peale therapists walk with their clients through the challenges of life. They help them to heal, to grow, and to flourish.  In 2021, we provided 41,000 sessions of affordable mental health care to New Yorkers who needed it most. This includes talk therapy and complementary psychiatric services. Our goal is to help each person become their best self, the person they were born to be, and to find their own resilience.

Blanton-Peale is a safe space for people dealing with trauma, anxiety, depression or thoughts of self harm.

And because we work with such a diverse set of clients, Blanton-Peale is a sought-after training ground.  Young social workers, mental health counselors, psychiatrists and psychoanalysts, get the experience they need under the wise and watchful eyes of our expert supervisors. 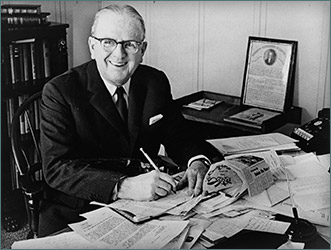 The Dream of Two Individuals

Our founders, Dr. Norman Vincent Peale and Dr. Smiley Blanton, were innovative, forward-leaning thinkers.  In the midst of the Great Depression – a time of rising unemployment, tumult and pain – Drs. Peale and Blanton were among the first to address mental health alongside spiritual care.

Today, in this time of upheaval and change, we have set out to be as bold and positive as our founders were.

What began as the dream of two individuals – eager to bring hope and healing – now requires all of us, working together.

More about Our founders and the Origins of Blanton-Peale

In 1935, in the thick of the Great Depression, The Rev. Dr. Norman Vincent Peale, who would soon author The Power of Positive Thinking, realized that religion and faith on their own were not enough to address the devastating emotional, relational and spiritual upheaval of those who sought him out. And so, he joined forces with the eminent psychiatrist Dr. Smiley Blanton, who had trained in psychoanalysis with Sigmund Freud. In 1937, their partnership birthed a first of its kind clinic that integrated psychology alongside faith to address mental health challenges.

The Counseling Center earned Blanton-Peale its first national recognition: a 1948 Newsweek article reported that more than 10,000 persons had come for help. In 1953, the Counseling Center was licensed by NY State, confirming it as a center for the mental wellbeing of all New Yorkers. In 1963, Fred Keuther, director of training, spearheaded the first international conference for the emerging pastoral counseling movement.

There have been many changes over the decades, but since 1996, the work of the Counseling Center and the various forms of training have been known by the names of our founders, Blanton and Peale.

Many New Yorkers today face challenges that are just as devastating as those of the Great Depression.  We face a mental health crisis and Blanton-Peale has positioned itself to respond to crisis with care.

In 2017, Blanton-Peale’s board and staff seized an opportunity that is propelling it into the future. Over the previous 5 years, requests for services had outstripped the available space. We were “bursting at the seams.” Our 4,000 square foot facility was filled to capacity 6 days a week. We had grown by 91% in just 5 years and had to turn away New Yorkers seeking our support.

Then, an additional and adjacent floor became available at our Midtown Manhattan location, creating the opportunity to double our impact on the lives of struggling New Yorkers. Board and staff acted quickly to lease the space, donors responded, additional therapists were hired.

In December, 2017, we opened a beautiful new second floor.  We continue to grow today, providing more sessions than ever before.